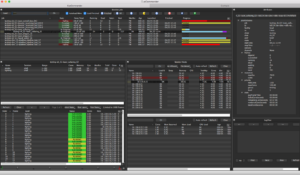 Contributed by Greg Denton with input from the entire OpenCue TSC.

Has it really been a year since OpenCue joined the ASWF? Time sure does fly. Given the project’s first anniversary, we thought it would be a good time to reflect on the progress the community has made with OpenCue over the last 12 months.

OpenCue is an open source render management system. You can use OpenCue in visual effects and animation production to break down complex jobs into individual tasks. You can submit jobs to a configurable dispatch queue that allocates the necessary computational resources.

One year ago, we formed the OpenCue Technical Steering Committee (TSC) and had our first group meetings. The TSC brought together a group of industry experts across studios and technology companies that shared an interest in production scale render scheduling. Together we focused our first few meetings on building the project roadmap and backlog, as well as growing our community through the ASWF user and dev email groups.

Over the months that followed, the TSC shifted our focus towards making progress on the project roadmap. We’d like to highlight a few of these accomplishments here.

OpenCue.io was launched to serve as a central location for communicating with the community through the blog, as well as to provide a location for project documentation. After the site launched last year our documentation continued to improve with the additions of more “Getting Started” and “Quick Start” walkthroughs which have helped provide tutorials for new users to try out OpenCue quickly.

We also adopted the ASWF continuous integration pipeline that has allowed us to safely run tests and create new releases. As part of this move we began following the CLI Best Practices for the project and have dramatically increased testing coverage throughout the code base.

In preparation for the end of support of Python 2 and changes to the VFX Reference Platform, we updated our Python code to be Python 3 compatible. We made these changes with flexibility in mind, keeping as much Python 2 compatibility as possible, while adding Python 3. This allows users to simply switch over the Python 3 when they are ready.

A common request from users was the ability to add arbitrary limits to jobs that would prevent too many concurrent jobs running at any point in time. This functionality is necessary to create limits that match the number of licenses available for any 3rd party licensed applications. In response we added the Limits functionality, which monitors the number of actively running frames and ensures that no tasks pick up beyond the configured limit.

Although Limits were a common user request, the most common request we heard was adding Windows support. In early 2020 we announced Alpha Windows support for both the RQD render agent and all the client tools. This allows users to submit and run jobs from a Windows machine. We are happy to be able to support many new users by enabling Windows support and are actively soliciting feedback from the community on improvements to the Windows operability.

We look forward to another exciting year ahead and are always looking to grow the community, so please reach out with your thoughts and feedback.