Behind the Screens: Carmen Pinto, Foundry

By Emily OlinApril 8, 2020Behind the Screens, Blog, Latest
No Comments 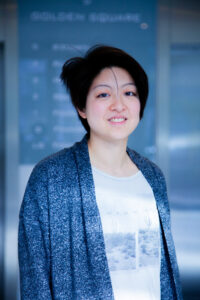 My first job as a software developer was designing a system to sort music files by metadata for employees at an engineering company, which led to work building software to store and display images at a fashion company called Ginch Gonch. The work with databases led to a five year long stay developing integration systems at the municipal government in Canada.

I did some work developing touch interfaces at a smaller company for a year, and started a degree in interactive arts and technology. While there, I became one of the SIGGRAPH conference student volunteers, and saw Pixar’s presentation on moss generation for Brave. The idea of mathematics becoming art, through the equations of colour, density and geometry being translated into rendering really interested me. Luckily, my former high school calculus tutor was the mother of a studio supervisor, and through that connection I started my first job in the VFX industry.

I’m currently a Software Engineer at Foundry. Over the last few months, I’ve worked on updates to Nuke’s Blink architecture for GPU support including improving stability alongside the work to improve performance for nodes that use multiple frames, including the Cara VR nodes, though introducing a GPU caching system. Recently I joined the sub-team working on adding support for reading USD in Nuke. We’re working on a USD plug-in for the ReadGeo node, which will make it easier for artists to use USD assets in the same way as fbx, alembic and obj – for example for 3D matte painting projections. We will be open sourcing our work on Foundry’s Github.

The first TV show I worked on was Motive – a police procedural drama actually set in Canada. I was a production assistant at Stargate Studios in Vancouver but wrote a plugin for Nuke that would read CDL values from the web-based shot tracking software at the studio, and created a node in Nuke.

It’s probably a tie between Final Fantasy Kingsglaive and Logan. Square-Enix were wonderful to work with. In most productions, the director, and by extension, the vfx supervisors have very set ideas as to what they need a sequence to look like. In Kingsglaive, Square-Enix let our artists have a lot of creative freedom, including directing action sequences. The results were incredibly detailed animations, even in the shot backgrounds.

For Logan, I worked in asset pipelining in the FX department, and the fluid simulation work was fascinating to watch take shape. Before the fluid is transformed into a mesh, it was often previewed as points splashing around the viewport window. In Logan, a lot of the FX work was blood splatter, and watching a group of artists clustered around a monitor, imagining blood, but cringing at what looks like millions of tiny dots spilling out of the glowing outline of a manakin was fun.

The shared ownership of many people both developing and using the software can result in continuous improvements – whereas otherwise development might stall if all the goals of the software had been reached for a particular company. On the other hand, it can be difficult to reconcile conflicting priorities from multiple bodies, and the result of trying to accomplish too many goals can be software that isn’t optimal for anyone.

I previously contributed to Gaffer at Image Engine. Gaffer is a graph processing framework specialized for VFX. It can be used for pipelining assets, controlling lighting, and sending jobs to Tractor. I currently use USD the most, although I haven’t contributed to it yet.

Finding the right people to help guide and develop projects, not just the source. Even though open source projects are community projects, often a few individuals or companies will emerge that tend to direct the flow of development. As long as the key contributors continue to push development forward, the project tends to get better over time – but it can be easy to lose these people to other projects or priorities.

It would be great if the Academy Software Foundation could encourage different studios to contribute their in-house developments back into the projects. Two examples that come to mind are OpenEXR and OpenColorIO.

Some of these advancements will likely be too studio specific to put back into the main repository, but assistance would be helpful for merging the ones that can be merged back. I think this would help these projects continue to get better for more people.

It would be great to see the ASWF more involved with USD; many different companies are working with USD and the tech is developing very quickly in several directions. Having a body like the ASWF helping guide development may help USD stabilize sooner and make it easier for developers to integrate into their workflows.

Many products at Foundry use OpenColorIO and the teams are really excited for OCIO v2. Greater consistency between CPU and GPU will be really helpful, especially for tools like Nuke and Nuke Studio, and we’re looking forward to having this released!

As more studios and Foundry products are using USD, we would love to have greater standardization in USD and have the ASWF help with this.