By Emily OlinDecember 15, 2020No Comments 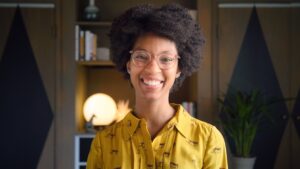 I studied Computer Science in undergrad and grad school. BS CS from Georgia Tech & MS CS from UC San Diego. It wasn’t until I saw the computer graphics and animation research from the excellent research lab at Georgia Tech that I first became interested in film as a career option. I thought that you had to have studied more “traditional” art or have gone to film school in order to work in film. I didn’t land my first internship until I got to grad school though. It was at Pacific Data Images (PDI, which was owned by DreamWorks Animation) on the Animation Technology team – the team responsible for the proprietary animation tool Premo! I continued my internship down at the main DreamWorks campus in Glendale while finishing up my Masters. After I graduated, I went to work at Disney Animation as an assistant Technical Director on Zootopia, then went back to DreamWorks to work on the pipeline team.

I’m now at ILM working on the pipeline team in R&D. We are responsible for designing, developing, and maintaining artist-facing tools for interacting with data in our pipeline.

When I started at PDI/DreamWorks, Premo was right in the middle of development, and its target show was for How To Train Your Dragon 2. We saw a lot of test shots and test animations as we pushed for developing a natural interaction platform for animators. It was really really cool to see Premo progress in the 2.5 yrs I was there. And the animators were excited too! I was in a contractor-type role since I was still in grad school, but I mostly worked with the optimization lead on the LibEE Profiler – a UI to help riggers visualize the complexity of rigs being evaluated in Premo’s multithreaded dependency graph. This was my first experience getting to see a film progress and to learn how departments work closely together (ie. animators & riggers).

How did you first learn about open source software?

I feel like I didn’t really start to understand what open source software was and its applications until I got “on the job.” Because I was at DreamWorks, the one I heard and learned the most about was OpenVDB.  I remember the developers doing a demo of it too.

I like that developers can contribute from anywhere! However for some people’s personalities the remoteness of it can make them feel disconnected – because there’s not someone there that you can just stop by and ask, like a work colleague or office hours at school.

In your experience, what has been the biggest barrier to entry for participating in an open source project?

Unawareness.  I didn’t really know a whole lot, if anything, about open source software in college. Although I think at least if you take a computer vision course you may be introduced to OpenCV, and there’s other domain-specific projects…but if you’re not in those classes…how do you know these projects exist? People also probably don’t realize that the definition of it being open source means that anyone can actually contribute to it. It’s not reserved for just professionals.

Showing how they’re used in films. Having a concrete example of how their contribution will be used will make it more appealing.

That it’s just as important to learn and apply skills outside of schoolwork as well. Most of the time as students, we’re all bogged down with doing the assigned homework because we’re trying to get a good grade in the class and move on. But having those “real world applications” of the concepts we’re studying about makes the experience far more rewarding. For example, there are many students that write games in their spare time,  and those kinds of project-based assignments are what I’d like to see more incorporated into coursework.  And even once you have a full-time role, you can also use open source projects to continue to develop skills…possibly in an area unrelated to your day job.

What do you see as the most challenging aspects of creating a more diverse and inclusive environment in the VFX and Animation industry, and what steps have you taken to meet such challenges?

Being able to not only go to our usual sources for talent, but also look for new sources.  Let’s go to universities that we haven’t been to before…new conferences, etc. It’s why I am passionate about outreach and participate in panels and events. People need to first know that working in VFX & animation is an option, even if it ends up not being their chosen career option. They need to see people that they can relate to in those roles, so that it doesn’t seem like a lofty, intangible career goal.

I’ve joined the Diversity & Inclusion initiative and I’m excited about the outreach plans we have coming up.

I’m not sure why, but I think because the projects are used in major studios it can seem intimidating for some people to want to contribute.

In addition to raising awareness, promoting a type of intro course would help the projects not seem as daunting to join. This “course” can be a collection of Getting Started links, and then a “difficulty label” on all bugs, tasks, feature requests, etc. so newcomers can easily find the entry-level things to complete as they get to know the system. As they get more comfortable, they can tackle more challenging tasks.

What do you think is most important for the Academy Software Foundation to focus on in the next five years?

Outreach at the university level. It would be really neat if there was an independent study course at universities where students can contribute to one of the projects. Maybe even by the end of the semester they have a feature that progressed from design to implementation! It can not only help improve coding skills, but also communication & team working skills. It’s a great introduction to learning how to work remotely.

Try new food, wines, & cocktails! Then hop on my Peloton to justify it all!  😀

Behind the ScreensIndustrial Light & Magic