By Emily OlinFebruary 11, 2021No Comments 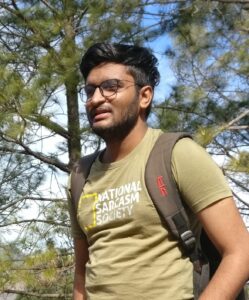 I found my interest in Computer Graphics in class 10. I was working on a programming project for the annual school exhibition. One of my seniors introduced me to Blender. I saw some tutorials, made a few models and rendered them, and got thoroughly hooked!

Two years later I joined IIT Roorkee as a Chemical Engineering student and got lots of
exposure to open-source. That’s when I found out about Google Summer of Code (GSoC) and saw that Blender had been a regular mentor org for a long time. On realizing that even students like me could get involved in such projects, I decided to study more about graphics. I saw ASWF in the GSoC’20 mentor orgs list and instantly knew I wanted to get involved. Taking this opportunity, I contributed to OpenTimelineIO, and eventually got selected as a student developer with ASWF (OpenTimelineIO).

What is your current role?

Currently, I’m a final year undergrad at IIT Roorkee and am the Head of Technology at Mobile Development Group (MDG) IITR, one of the campus Tech groups. I joined MDG in my first year in college, that’s where I got a lot of exposure to open-source and found out about GSoC.

I’ve never worked on feature films or shows, but for the first two years in college, I was part of another campus group, CineSec, that made short films, music videos, animations, etc. Though I was an editor there, on my first project (a short film called Raghunath) I helped with production. I then went on to edit a few short films, event teasers and videos.

I like the very nature of open-source software. A lot of quality software, code and knowledge is available to everyone free of charge. It’s also generally easy to get involved and doesn’t require contributors to have specific formal qualifications. You also get to work with diverse teams, with whom you wouldn’t be able to collaborate otherwise.

I dislike that a lot of the time, unless the project is funded or managed by an organization, there’s no central authority to guide and keep the project alive. All the responsibility comes down to a single or few individuals. If these people don’t find time to maintain the project, it goes stale. I like that ASWF has taken projects under its wing making sure that they stay alive, reliable and up to date.

What open source projects do you use or contribute to?

I use Linux on a daily basis. Currently, I’m using LIGGGHTS, VTK and Python as a part of my final year project. I contribute to OpenTimelineIO occasionally. As part of GSoC’19 programme with the TensorFlow org, I built a cross-platform Swift data visualization library, SwiftPlot.

Find an issue to work on and submit Pull Requests. If you’re confused about something or get stuck, do not hesitate to ask people in the community. They’re there to help. I’ve found open-source communities to be very open and helpful. It helps if you know how to effectively present your ideas, and just observing people communicate on platforms like Slack or mailing lists teaches you a lot. To any students reading this, participate in coding/software development programs like GSoC and Outreachy. It’s fun, and you’ll learn a lot!

I contribute to the OpenTimelineIO project. I first got involved as a GSoC student. Before applying to GSoC I worked on a few issues and then submitted PRs. I wrote a simple OTIO to SVG adapter and made some improvements to otioview (a small application to view otio timelines).

My GSoC project was to add support for predicates from Allen’s interval algebra to OTIO, and build C & Java bindings for the library. I thoroughly enjoyed working with my mentors and the community on the project. It was definitely a great learning experience, but the most exciting part of working with ASWF for me was getting to interact with such experienced industry professionals. Nick Porcino, Joshua Minor, Eric Reinecke
and Stephan Steinbach guided me throughout the process. People outside the TSC (Anton Margoline and David Baraff) too came to help with the Java bindings part of the project!

I still try to contribute to the project in any way I can.

ASWF already has some great initiatives going on to make the community as inclusive as possible. Participating in GSoC as a mentor org is one of such great initiatives. I hope the foundation continues to do so in the years to come. There’s also an effort to get school and university students involved and introducing them to software development in the film industry. I think it would be great if this becomes a global effort in the future, because a lot of countries like India have very low exposure to this field. ASWF has made the community accessible, but I’d also like to see a collection of resources or tutorials for complex topics, that’ll help newcomers learn and get involved.

Behind the ScreensGoogle Summer of Code