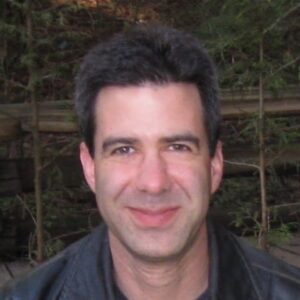 I had a hobby interest in visual effects and photography after seeing Star Wars in 1977. In particular, this 1980 TV special was transformative for me. I recorded it (VHS!) and probably watched it a hundred times. But I never considered it a serious career possibility (this was long before digital effects). My original computer science interest was compilers. I stumbled upon computer graphics in its early days (late 80’s) by sheer luck of being at Cornell University when it was a research hub in that new field. I was a PhD student at precisely the time (early 90’s) when VFX was going digital and graphics research became relevant to film. It was all a lucky set of right time / right place coincidences and wisely jumping at those opportunities when they arose. Since then, I have never looked back.

I am one of the architects in the software department at Sony Pictures Imageworks, dealing mostly with department-wide issues of our software methodology, technology strategy, managing our open source efforts, and helping other developers in the department be more productive. I still spend about half my time directly creating software for production, mostly focusing on realistic rendering, shading, texturing, and image processing.

I no longer work directly on film shots with my own hands, but the software I write is used on every frame of every film Sony Imageworks makes. Also, through the magic of open source, code I write is also used on a substantial portion of all visual effects and animated films industry-wide.

The first film on which I have actual credits is Toy Story (1995). I did shaders/lookdev, and shot lighting, while working at Pixar Animation Studios.

The open source projects are among the most professionally rewarding things I’ve done. It’s all the excitement and satisfaction of having a widely used product that can move a whole industry and get recognized by peers elsewhere, but without the hassle of actually marketing and selling a commercial product and all that entails (which I have also done at other times in my career).

The projects I directly run as the founder and a primary contributor are Open Shading Language (which won an Academy Sci-Tech award and recently joined the Foundation) and OpenImageIO. But I’m also a steering committee member (and occasional code contributor) for OpenEXR and OpenColorIO, and of course help manage all of Sony Imageworks’ open source efforts.

I participated in the Academy’s exploratory process that eventually culminated in formation of the ASWF. Upon its formation, I represented Sony Pictures on the Technical Advisory Council. I’m also on the TSCs for two member projects.

In a way, some projects are the victims of their own success — they have become such core infrastructure in this industry that people take them for granted. It’s easy to forget, as a user of software that always seems to work, how much ongoing effort is required to maintain it and keep it responsive to changing needs.

Normalizing the expectation within member companies that engineers should contribute copiously to relevant open source projects — not just one or two people in extraordinary circumstances or with special permission, but as a normal and expected part of any software developer’s daily duties. If an engineer sees something that can be improved in some piece of software that their company relies on, they should be expected to fix it.

Find a project that you or your company actually uses, or could imagine using after you have improved it. The best contributors are scratching their own itches and feel a personal stake in the success of the project.

In every project, you will find many tasks that are very valuable but can be tackled even by people who are not yet domain experts or deeply familiar with the code base. Ask, and the senior developers will point you to something, even if it’s investigating or fixing a small bug, writing a test case, or straightening up some project infrastructure. From there you can bootstrap your way to bigger and more central contributions.