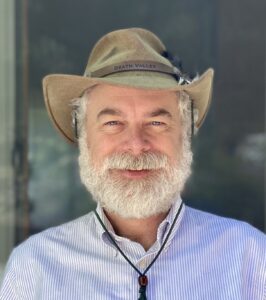 I saw Star Wars when I was twelve, and decided then and there “I want to help George Lucas make movies.” Not much later, Jim Blinn created an amazing animation of the Voyager spaceprobe flying past Jupiter, and my goal became “I want to help George make movies, using computer graphics!” Every choice I made subsequently was a step in that direction. Ultimately, that led me down the path of film-game convergence, during the production of the Star Wars prequels, and to concepts of virtual production which we explored heavily on Star Wars: The Clone Wars. It was an absolute thrill when I was able to relate my origin story to George!

Today, I’m a member of the Pixar Story and Editorial Tools team, where we collaborate with Pixar’s storytellers on innovative tools and workflows at every stage of the story creation process, from storyboarding and virtual scouting, to composing media into versions of a film.

My journey began in the world of 8 bit video games, as a programmer-artist. My background as a game engine programmer got its first test on a film for the opening space battle in Attack of the Clones. George wanted to stage things virtually so it could be shot as if it was documentary footage. The space battle took place over a vast distance, where the limits of precision of computer math made working with that scene really difficult, and the space ships refused to move on smooth paths, or even hit their marks properly. I had just solved those exact problems for the Jedi Starfighter video game, so my first work on a film was to apply that game technology experience directly!

It was definitely Star Wars: The Clone Wars. This was the culmination of years of exploration on virtual production, and so many concepts and workflows were put to the test for the first time, and tempered in the flames of an absolutely unique production effort. Building and supporting tools and workflows for directors was completely eye-opening and an education. I will never forget iterating a tool for George and discussing a fine point of its operation, when he dropped the stylus and swiveled his chair around and pronounced: “At last, you’ve learned to think like a director!”

I am extremely keen to train and pass knowledge to the generation that follows us. Open Source is an unbelievably helpful and generous way to do this – when managed and designed effectively, it’s not knowledge passed via word of mouth or dependent on ad hoc secret sauce, but rather solutions that a skilled practitioner or a student at the beginning of her own journey can explore completely and deploy productively. This is truly a wonderful thing!

A downside to open source is that sometimes it’s considered as some sort of inviolable holy writ. Things can always be improved, forked, or burned down! Use it where it suits your needs and fuels your passion, and if you come up with something that turns fashion or dogma on its head, that’s fantastic – let us know, teach us new ways to think about things!

I contribute to Pixar’s USD effort, OpenTimelineIO, and am an OpenEXR Technical Steering Committee (TSC) member. I started a realtime audio engine named LabSound and help with the quadplay fantasy game console. I maintain a number of community resources, such as the usd-resources project on github.

The formation of the ASWF was the light at the end of the tunnel. For so long in both film and games, we’ve reimplemented the same wheels again and again. For foundational technology, years spent on the same problem are years not spent on innovation and invention. Why must we all repeatedly learn the same lessons independently? For me, the creation of the ASWF was like the day when the alchemists with their secret grimoires came blinking out into the light and started to share and systemize their findings, and science was at last born!

There is a great confusion in the industry about the difference between a technology and the application of the technology. We are at a stage of maturity now where proprietary value is not primarily in foundational aspects such as “how do I represent a point cloud in memory?” but in the application: “how do our artists create volumetric effects that stun and amaze, and thus drive clients to our business?” When we fail to make this distinction, we run the risk of polishing and coveting tiny pebbles when diamonds are available right outside the cave.

I would like to see efforts promoting practice and application, white papers and tutorials with topics such as color managing image files in an HDR workflow, or taking a simulation from DCC to a game engine via OpenVDB.

Presenting a consistent level of quality across projects, and community engagement.

In addition to stewarding the foundational software technologies of our industry, I’d like to see it as the vibrant hub of a practicing community of technologists and artists.

Get involved with a project via Pull Requests and Issues. Subscribe to relevant lists. Learn how to present your issues and ideas in an actionable way, be diligent about follow up and acknowledgement. If you find yourself passionate about a project, or consistently involved and would like to be more directly involved, reach out on projects’ individual mailing lists, we’re happy and delighted to engage!

I would like to see more from the AV side of things; something like ffmpeg, or selfishly, my own LabSound engine 🙂