By Emily OlinOctober 9, 2020No Comments 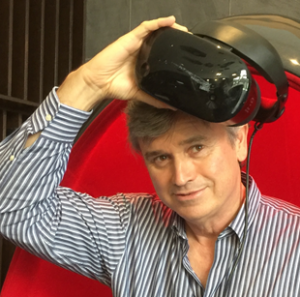 For many years I wrote the graphics column at Linux Journal. I interviewed DreamWorks Animation CTO Ed Leonard for an article, part of a series about how Linux was being utilized at Hollywood studios. Ed asked me what I did when not writing my column. I said I had created an MPEG remote non-linear video editing system installed at Time-Warner NY1 and 100 other TV stations for editing local broadcast news. I’d also been a navy research scientist for VR and the director of a defense company AI research lab. I had built the robotic television studios at NBC.

Ed said, DreamWorks hires the best computer scientists in the world, that if I ever wanted to join DreamWorks, to say the word. I said, ok Ed, I’m saying the word! I moved to Los Angeles to work at DreamWorks Animation.

DreamWorks was my first job in feature animation. My first visual effects job was in television as technical director of broadcast news at an NBC-TV station. I was live switching the nightly news and had an Abekas A-52 visual effects box.

Gaming. Visual effects and animation for features now uses game engines, specifically Unreal Engine. I created an Unreal Engine VR motion-capture animation system that Hollywood uses for adding digital stunt doubles to films such as Iron Man and Spider-Man. Mattel uses the same system to produce their hit animated series Barbie Vlogger. AAA games, such as Call of Duty, use it to produce their game trailers. A real-time animation system. Actors, wearing dot-suits and a tiny boom cam pointing at their face to capture lip-sync, appear as 120fps animated characters on studio monitors. Using software I created, a fully animated cartoon can be produced live on a sound stage.

My first animated film was DreamWorks Animation’s Shark Tale, although its title was Shark Slayer during production. I also worked on Shrek 2 and Over the Hedge. All three were in overlapping production. I was on the DWA Film Look Committee, improving image compression and the HDR look of all DWA films. I learned a tremendous amount working at DWA. Am grateful for that experience and everywhere I’ve gotten to work…House of Moves, GoPro, AT&T DirecTV, SAIC, the navy, NBC, game startups, magazines including Popular Science and Popular Photography. Graphics and innovation are exciting; it’s a fun job!

I didn’t start with film. My first TV show was the nightly news at a local NBC-TV station. As a university student, I had shot a documentary about the dance department. Editing that video, I spent the summer at the local community access TV station. Taught myself video editing and helped out the station manager whenever he was short of crew.

At the end of the summer, the cable station manager stuck his head into “my” edit bay and said he wanted to ask me something. I was finished with editing the dance documentary, which broadcast on PBS and got an award. He said, would you like a job in TV? I said, that would be great! I would love to work here! He said, oh no, not here! This place is terrible. Let me make a phone call…

The right person making a phone call for you is life changing. That same night, I was working on the nightly news as teleprompter at the local NBC affiliate, WICD-TV. Having worked every position at the cable station, I advanced quickly through camera operator, floor director and Chyron operator to be technical director. After a summer break from NBC to produce a dance documentary at Jacob’s Pillow, I switched from production to engineering to build the NBC owned-and-operated studios in Chicago, WMAQ-TV.

The first show I worked on was radio while still in college. I was the Saturday morning host-producer at WEFT-FM. I announced news and spun jazz records.

For daily exhilaration, nothing beats producing live nightly newscasts at 6pm and 10pm. I loved my job as technical director of broadcast news at NBC. Another live production experience, I produced 55 1-hour episodes of a live talk show series sponsored by Universal Music. At House of Moves, working on producing cartoons live was groundbreaking.

As a defense contractor, I sailed on an aircraft carrier to test at sea AI television technology I developed for DARPA. The autonomous system uses AI to watch television then alert analysts when a topic is mentioned in the news that they may need to be concerned about. A video editing system in reverse, chopping up the broadcast stream back into its component news segments. A robot that watches TV and tells you when something is on that’s interesting to you.

As a navy research scientist, I built the first realistic VR war gaming system. Although the game looked like Call of Duty, that was before PCs were powerful enough to run games like that. We had one of the world’s largest installations of graphics workstations and supercomputers.

While writing my column at Linux Journal, I encountered an open source HDR paint program in use at a studio for the production of Scooby-Doo. Open source software funded by the film industry as a replacement to Photoshop, which at the time was available on SGI IRIX. To the studios, Photoshop was a key tool for frame-by-frame dust-busting of negatives and render touch-up in cartoons. The studios were migrating from SGI to Linux. Adobe had no plans to release Photoshop on Linux. The film industry took an existing 8-bit open source paint tool and extensively rewrote it to support HDR and exotic film industry file formats.

Although CinePaint was an open secret in Hollywood, the public had never heard of it before I wrote about it in Linux Journal. There was no project leader. Each studio worked on the bits they needed for a particular film, contributed changes via CVS, then moved on. Used in making the Harry Potter films, the Lord of the Rings films, the Stuart Little films and many more.

After reading my article in Linux Journal, readers wrote me to report bugs and sent me patches. As keeper of the patches, that made me the CinePaint project leader. Sony called and offered the patches they’d created during Stuart Little 2. ILM reached out to give me their CinePaint OpenEXR plugin.

Ken Museth, Senior Director of Simulation Technology at NVIDIA and OpenVDB Chair, said during an ASWF meeting that he would like help with improving the Windows Cmake build systems for ASWF tools. I volunteered.

I’ve been sitting in on the ASWF OpenVDB Zoom calls. During a recent call, a question arose. Why doesn’t C++ have Half support? That is, a floating-point 16-bit data type. I asked the group, would you like me to ask Bjarne Stroustrup, the inventor of C++? I’d gotten to know Bjarne decades ago while teaching C++ at the University of Washington using his textbook. Bjarne wrote me back that 16-bit float is coming, expected in the next C++ release. He told me who to contact that’s working on that. Putting them in touch with OpenVDB is the most useful thing I’ve accomplished in the short time I’ve been with ASWF.

It’s hard to find time. When working on a motion picture, life can be crazy. Between projects there’s more time, but the major distraction of looking for your next gig.

For CinePaint, a challenge has been that there’s no funding to hire anyone for open source development. Volunteers want to contribute new features. Finding volunteers willing and able to do refactoring work is futile. Some tasks need dedicated professionals.

Some say, pick the ASWF project you are interested in by looking at GitHub. If that works for you, great. As an innovator by profession, literally everything interests me. A question I often ask is, how can I be most useful? What task does nobody else want? That’s how I get started. The job nobody else wants is often difficult, yet afterwards may feel the most satisfying to have accomplished.

What’s on the roadmap for CinePaint?

After my experience building studio tools for a Mattel Barbie cartoon series, I’m keen to do more with animation. Make CinePaint a much better tool for cartoons. Add features to make it a great tool for drawing storyboards and comic books. Then animating them. Add sound support to the flipbook. Animation support within layers and onion-skinning. Bring 2D and 3D graphics features into a simple frame-based workflow. Make CinePaint a rapid tool for cartoon animation that’s much less learning curve than complex 3D tools like Blender and Maya.

I’ve been working on a new CinePaint build system for quite some time. When that releases it will be easier for others to join me again to work open source on CinePaint.